Consumer Drug Take-Back — It's Not Only A Public Health Issue, It's Personal 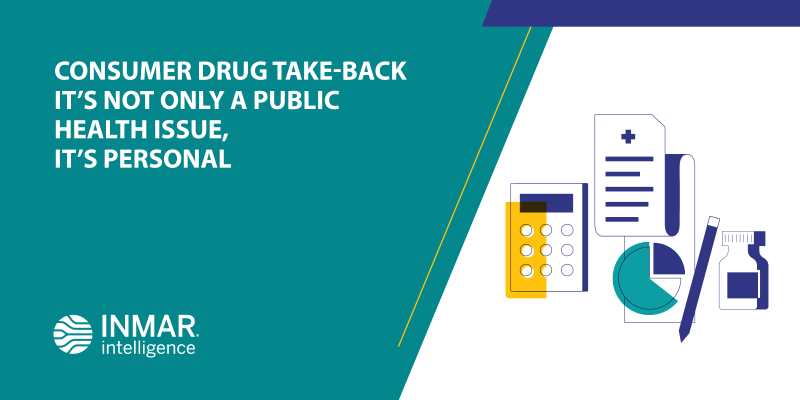 This year, overdose deaths increased 30% in the US, reaching the highest rate in our country’s history. That means, on average, over 260 Americans die every day from a drug overdose, according to the CDC. This persistent (and increasing) problem demands new solutions. Inmar surveyed 1,000 adults across the US to understand how they’re personally impacted by prescription drug misuse, and to gauge their awareness of proper disposal options.

Most people are storing leftover medications in their home — 73% according to our survey. We know that 51% of misused prescription pain relievers are given by, bought from, or taken from a friend or relative (National Survey on Drug Use and Health SAMHSA 2020). Medications are also the leading cause of child poisonings. More than 60,000 children are treated in emergency rooms each year due to accidental ingestions (ASTHealth.org).

But it’s not only storage that negatively impacts public health — it’s also flushing old medications. While 63% of those surveyed said they’re aware of the environmental issues associated with improper disposal, 61% admitted they have thrown medications in the trash or flushed them down the toilet or sink. According to a ScienceDirect February 2017 report, at 25 water treatment plants across the US, 37 different drugs were found in the drinking water — after the water was treated.

The DEA’s National Prescription Drug Take-Back Day provides an opportunity twice a year, April and October, for Americans to help prevent drug addiction, overdose deaths, and to protect the environment. Still, while 52% of survey respondents have heard of National Prescription Drug Take-Back day, only 39% have participated. Their initiative could use a boost. It’s only two days a year, after all. By promoting Saturday take-back events across the US, Inmar is helping to resolve this issue.

What about every day disposal options in our communities?

By promoting the DEA’s National Prescription Drug Take-Back Day, and supplying Drug Take-Back kiosks to pharmacies, Inmar is doing its part to help provide solutions. We hope you’ll join us in the fight.

Will DIR Reform Be Everything Pharmacies Hoped For?

Direct and indirect remuneration (DIR) fees have been a controversial topic and a thorn in the side of pharmacies for years. Responding to the pharmacy industry’s long push for DIR reform, the Centers for Medicare and Medicaid Services (CMS) issued a rule last May that will eliminate PBMs’ retroactive application of DIR fees beginning in January of 2024. As we approach this deadline, Inmar Intelligence is committed to keeping the pharmacy community informed — so you can be better prepared for the DIR reform implementation.

Let’s face it. The Drug Supply Chain Security Act (DSCSA) is demanding changes to your business, and some of them will be extremely complex. Now is the time to evaluate your organization’s progress toward compliance — and take charge of completing all the necessary steps before full implementation.

We’re here to help you navigate the DSCSA labyrinth.